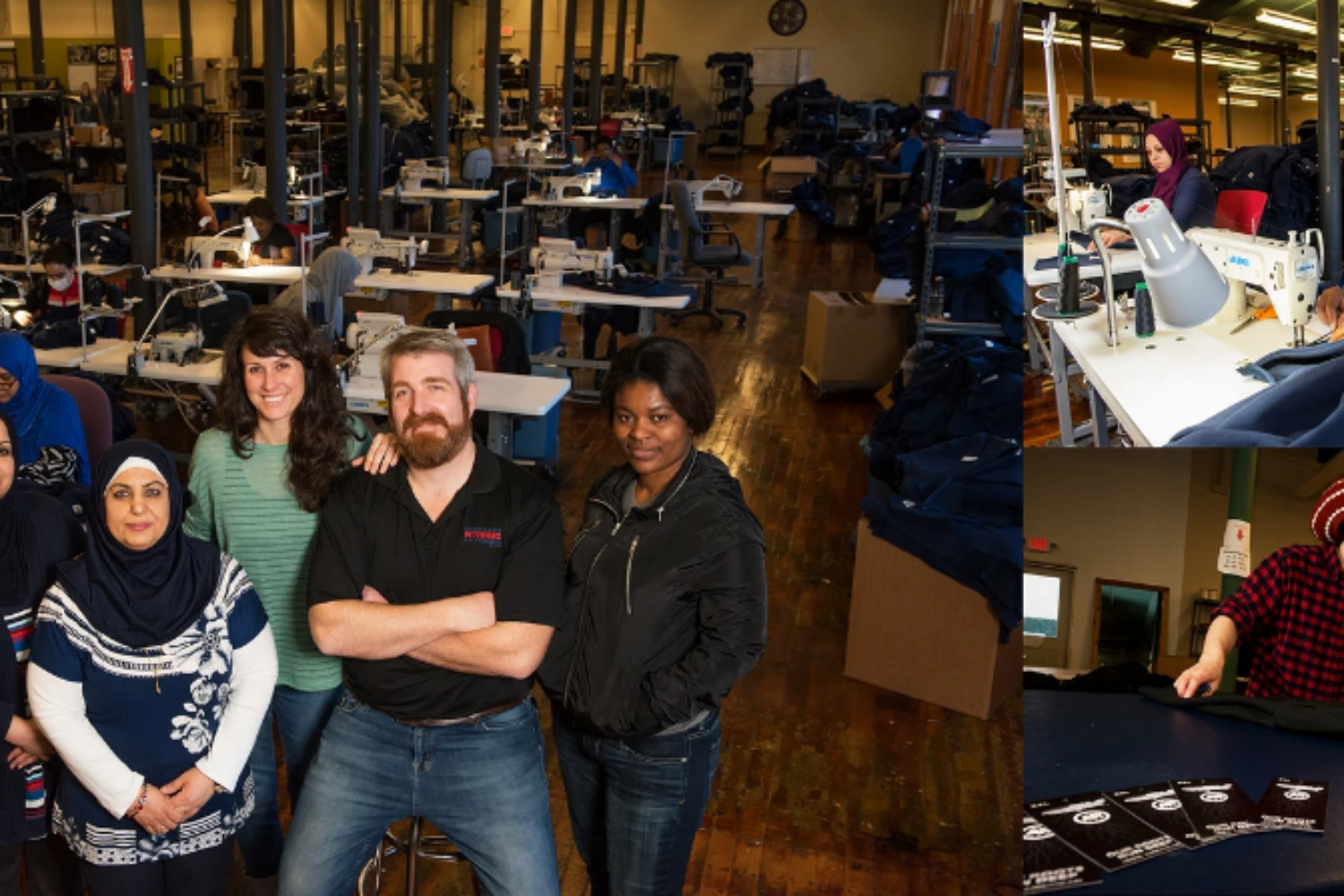 Ben Waxman and Whitney Reynolds, Co-Founders and Co-Owners of American Roots, standing with their team who are members of USW Local 366.  American Roots has repositioned to produce PPE, putting their team back to work and aiding essential workers during the pandemic.

Westbrook, Maine – In early March, Ben Waxman and his wife, Whitney Reynolds, co-founders and co-owners of American Roots, like many small businesses, were forced to close their apparel operation and layoff their workforce due to COVID-19.  Ben and Whitney quickly made a decision to not accept this outcome as inevitable—instead, almost overnight, they shifted their business from making 100% union made apparel, towards addressing the shortage of Personal Protective Equipment (PPE) due to the COVID-19 pandemic. American Roots, a union clothing manufacturer, sources all raw materials in the United States and employs proud members of United Steelworkers (USW) Local 366. Ben is also a member of the AFL-CIO Investment Trust Corporation (ITC) team.

Over a 24-hour period, with help from employees and volunteers from the International Alliance of Theatrical Stage Employees (IATSE Local 114), American Roots was able to convert the factory into a socially-distanced sewing room. Because of the conversion, the factory now produces hundreds of thousands of face masks and face shields. “We raced against the clock back in March to retool our factory so we could help the state of Maine and the nation get through this health crisis,” said Ben.

Facing a projected 70% decline in revenue at the onset of the pandemic, American Roots transformed their business model and retooled their factory. Their employees are back at work and their ranks are growing. “We are proud that we are able now to provide a much-needed service for our first responders and medical personnel,” said Whitney. “American Roots’ original mission, back in 2013, was to revive the union-powered apparel manufacturing industry that had essentially disappeared in the United States,” said Ben. “As a 100% American-made, sourced, and Union-powered company, American Roots is an example of how Union members are meeting the demands of a changing economic landscape.

“American Roots’ original mission, back in 2013, was to revive the union-powered apparel manufacturing industry that had essentially disappeared in the United States,” said Ben.

The AFL-CIO recently presented the AFL-CIO President’s Award to Ben, USW Local 366 factory workers, and IATSE Local 114 union volunteers in recognition of their courage to meet the demands of first responders. ITC joins with the labor movement to say “thank you” to Ben, Whitney and their extraordinary team for all their hard work that has positively impacted so many lives.