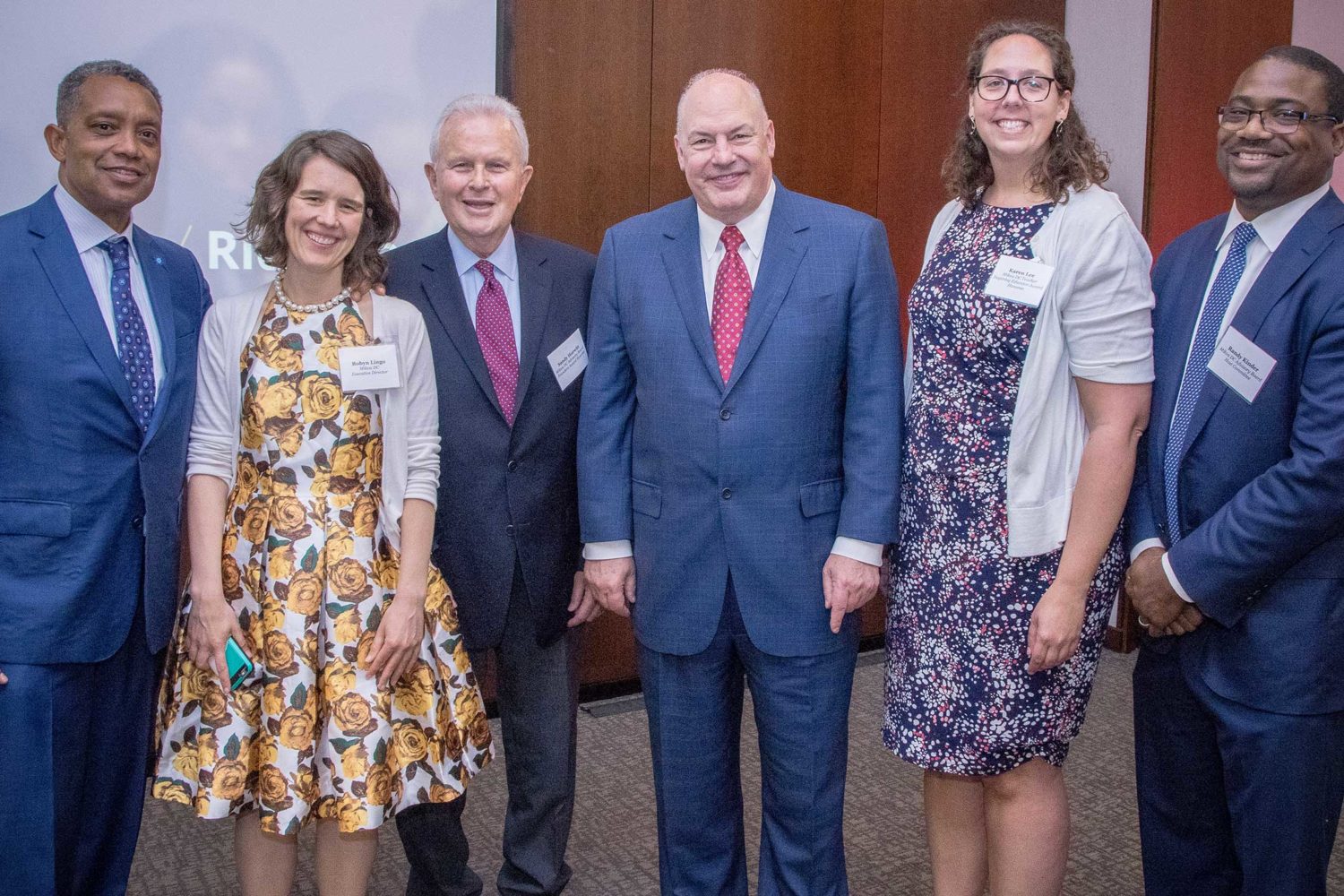 Mikva Challenge develops youth to be empowered, informed, and active citizens who will promote a just and equitable society. The ITC is proud to support a program like Mikva which envisions a stronger, inclusive democrazy that value youth voices.

Washington, D.C. — On April 30, 2019 the AFL-CIO Investment Trust Corporation (ITC) supported Mikva Challenge DC (Mikva DC) for the fourth year as a premier sponsor of its 2019 Spring Benefit at the Laborers’ International Building. This annual fundraiser celebrates and raises support for Mikva DC, which is committed to creating a stronger, inclusive democracy by developing youth and empowering the next generation of informed and active citizens.

Mikva DC was chaptered in 2015 using the framework of the Chicago based-Mikva Challenge, which was founded in 1997. This year’s rooftop ceremony honored four individuals whose leadership represents Mikva Challenge’s founding values—the premise that youth voice and participation matter, and that our civic and political life will be stronger when youth participate and help shape their own destinies.

In the last year, Mikva DC has showcased 25 student-led community change projects and touched the lives of thousands of students in the District through prominent programs:

As a testament to the strength of the Mikva DC programs, student leaders Lauryn Renford and Cara Gillingham acted as emcees throughout the evening. Both students spoke to the audience about the impact the program has had on their lives.

Robyn Lingo, Mikva DC’s Executive Director, thanked all the sponsors for their support of the program, which started in Washington, D.C., in 2015. The program has since grown 500 percent. She also acknowledged the Mikva DC Advisory Board and teachers, saying, “I think this is our best year yet.”

Perhaps the most memorable moment during the program was Nehemiah Jackson, Mikva DC’s 2018 Citywide Project Soapbox Finalist and sixth-grader at Friendship Public Charter School, who delivered his winning speech about police brutality without a microphone.

The evening’s first honoree, Sanford Horwitt, received Mikva DC’s Founders Award for being Mikva Challenge’s first Board Chair and leading the organization through its early years. Horwitt was instrumental in bringing the program to Washington, D.C., and sits on Mikva DC’s Advisory Board.

In his acceptance speech, Horwitt stated, “First of all, let me tell you how honored I am tonight to share the evening program with people of the caliber of Karen Lee and Ed Smith and the wonderful Karl Racine.” He touched on his latest book, Conversations with Abner Mikva: Final Reflections on Chicago Politics, Democracy’s Future, and a Life of Public Service, based on conversations that the two men had over the course of three years until Mikva’s death. He recounted how the Mikva Challenge was the thing that Mikva was most proud of.

He shared that the book was “dedicated to democracy’s next generation” and acknowledged young Jackson’s passionate speech as a prime example of the Mikva Challenge’s legacy.

“Nehemiah is a wonderful example of so many others. Talented and unique as Nehemiah is, there are also a lot of other people over the last 20 years who became as eloquent and as passionate about issues facing their neighborhoods, their cities, and our country….We all understand that this is a never-ending fight to make sure we have a free and open society.”

Renford, a student of Karen Lee, presented her teacher of four years with the Inspiring Educator Award for her incredible work to empower her students to be advocates for themselves and their community. Lee shared, “It is easy to stand up here and tell you all of the amazing things I’ve been able to do with my students because of Mikva Challenge . . . but it’s often the things that get left out of the big events that Mikva sponsors that mean the most to me and my work. It is in these moments like this morning when [a student] realized that her voice mattered … It is in the pride that I see in students’ eyes when they begin to feel the power behind their voices and they use it for a force for good in our own community.”

Lee lost two students to gun violence last year, and is committed to turning grief into action steps. She helped the students create the activist group, Pathways to Power. As a result of calling and working with D.C. city leaders, the group is creating a mural near Capitol Hill to memorialize the slain teens. She noted, “[Mikva Challenge] … offers a space where student voice always matters.”

Focusing on the labor community, Gillingham recounted the lifelong accomplishments of Edward Smith, President and Chief Executive Officer, of Ullico Inc. Smith received the Legacy Award for being a consistent champion for the Mikva Challenge and a crucial supporter in launching and sustaining Mikva Challenge DC.

Smith joined the Laborers’ International Union of North America (LiUNA) when he was just 13, and was elected business manager of Laborers’ Local 773 at age 21. He later became international union vice president and Midwest regional manager, serving over 58,000 members. He was the first member of LiUNA to graduate from the National Labor College with a Bachelor’s degree, and then graduated from the Harvard University Trade union program.

Mikva served on the Ullico board years ago, and Smith was with him at the Democratic National Convention in Chicago when Obama received his nomination. Smith noted, “It’s a very humbling honor for me to be here to accept this award.” His speech focused on the importance of the labor community to government, and described the democratic processes of unions. “There is no institution in America today that practices democracy more than the labor movement.”

The final award of the evening, the Youth Champion Award, was presented to Attorney General Karl Racine by Renford for his deep commitment to cultivating and mentoring youth civic leadership. Last year, Renford was a recipient of his Right Direction award, which rewards students for making true changes in their communities.

Racine’s speech picked up on the theme from Jackson’s award-winning speech earlier in the evening, and he also chose not to use a microphone. His remarks focused on violence in DC, its effects on students, and how to help them. He stressed the importance of getting officials to start talking about what young people go through. “…It’s the parents and the teachers and the organizations like the Mikva Challenge that are out here every single day trying as best they can to help support our kids….What [Mikva DC is] doing is really extraordinary, lifting up these young people and giving them that civic voice.”

He vowed to write and talk more about the issue, and reaffirmed his commitment to young people, stating, “What we’re about every single day is understanding youth trauma . . . Every day the office of the attorney general is going to be about ameliorating that and making it better for young people.”

The evening concluded with words from Randy Kinder, Mikva DC’s Advisory Board Chair and President of the AFL-CIO Investment Trust Corporation. He thanked the advisory board and national board for their work.

“To all of you who are here, thank you so much for your support—that you’ve given financially, that you’ve given in person. We hope this will be a catalyst for you to continue. We need you. Obviously these young people are wonderful…. This has been a fantastic ride these past four years. It’s just going to keep getting better.”